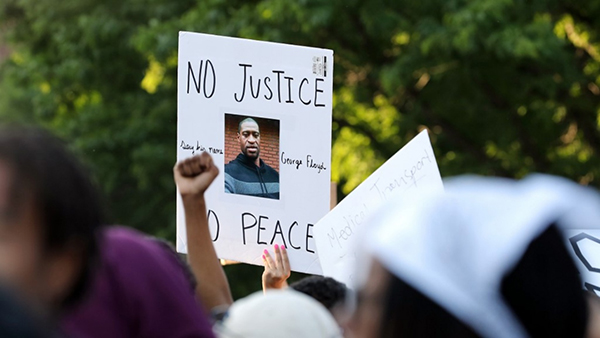 Rachel Ward, National Director of Research at Amnesty International USA (AIUSA), issued the following statement about the police response in cities nationwide to this weekend’s protests:

“U.S. police across the country are failing their obligations under international law to respect and facilitate the right to peaceful protest, exacerbating a tense situation and endangering the lives of protesters. In city after city, we are witnessing actions that could be considered unnecessary or excessive force. We call for an immediate end to any such use of force and for law enforcement to ensure and protect the legal right to protest.

“The use of heavy-duty riot gear and military-grade weapons and equipment to police largely peaceful demonstrations may intimidate protesters who are practicing their right to peaceful assembly. These tactics can actually lead to an escalation in violence. Equipping officers in a manner more appropriate for a battlefield may put them in the mindset that confrontation and conflict are inevitable. Police must engage in de-escalation, before the situation worsens. They should de-militarize their approach and engage in dialogue with protest organizers to reduce tensions to prevent violence or to stop it quickly as soon as it breaks out in order to protect the right to peaceful assembly.

“All unnecessary or excessive force must cease immediately, and all instances of potentially excessive or unnecessary force against protesters must be investigated and any officers who broke the law must be held accountable.

“Furthermore, we call on the federal government and U.S. cities and states to act swiftly and meaningfully to address the root cause of these protests and take immediate measures to stop unlawful killings by police of Black people and others. Officers must be prosecuted, all U.S. states must pass laws to restrict the use of lethal force as a last resort to prevent an imminent threat to life, and Congress should pass the PEACE Act to create a federal standard and incentivize state reform.

“Racism and white supremacy are fueling these killings and the police response to the protests. The federal government should set up a national commission to address all aspects of this crisis including killings by police, the right to protest and ending discrimination. President Trump must end his violent and discriminatory rhetoric and policies.

“The U.S. government at all levels must ensure the right to protest as guaranteed by international law.”

This statement is available at: https://www.amnestyusa.org/press-releases/police-failing-to-ensure-right-to-protest-endangering-lives/